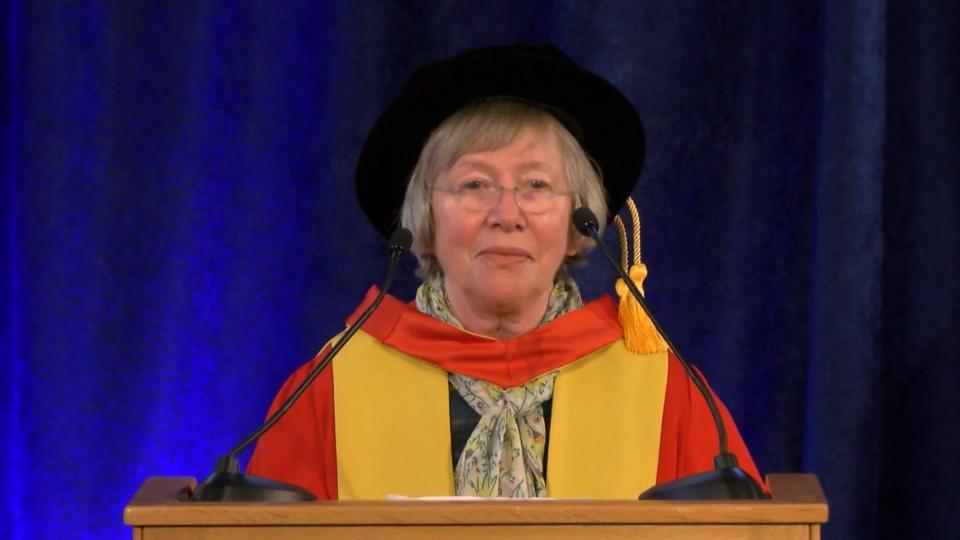 She does this in her research, which is in real algebraic geometry. The real numbers are the numbers used for measuring physical quantities such as distance. They are not as real as you might think: they are fundamental in mathematical analysis but they are hard to work with in other contexts. Real algebraic geometry, in particular, is surprisingly unlike the rest of algebraic geometry. She helped to break down that barrier as long ago as 1987, when she, with Bochnak and Coste, wrote a book called “Real Algebraic Geometry”, which remains the definitive introductory textbook on the subject.

Real algebraic geometry underlies algorithms that have many applications in computer science, engineering and other areas. Such algorithms are again surprisingly unlike most others. It took her another twenty years to break down that barrier, with a book written with Basu and Pollack called “Algorithms in Real Algebraic Geometry”. It is equally definitive. In her own active research, these barriers do not really exist: she crosses with ease from geometric theory to quantitative analysis, and from mathematics to computer science. Few people have such high standing in two separate subjects.

The barriers she breaks are not only factitious discipline boundaries. She is a leading activist for the cause of women in mathematics, and one of the most prominent and effective advocates for African mathematics.

At a national level in France she was a founding member, and first President, of the French Association Femmes et Mathématiques, as well as being President of the Société Mathématique de France between 2004 and 2007. More widely, she was also a founding member of European Women in Mathematics; and more widely still, she has been Chair of the Committee of Women in Mathematics of the International Mathematical Union, which is the global professional body for mathematicians, responsible among other things for the award of Fields Medals. Gender imbalance in mathematics remains a critical problem, but her efforts have secured a wide recognition of that fact and led to the deployment of serious financial and political resources to tackle it. Progress is visible and steady, if not yet swift.

After her doctorate, Marie-Françoise spent two years working in Niamey, in Niger. Her activities since then in support of mathematics and other development in Africa and elsewhere have been continuous, persistent and highly effective. The potential for mathematics in Africa is enormous: so, unfortunately, are the difficulties. The actual development has to be done by Africans, but they need and often lack consistent, reliable support over a long period. She has provided that: sometimes in person, but even more through fundraising, organisation, education and also through more general initiatives. Her work in Niger is by no means confined to mathematics: Tarbiyya-Tatali, a large group of organisations that supports educational self-development in Niger at all levels, is the result of initiatives of hers and her Nigerien friends.

African mathematics is on the way up. Again, that is and must be through the efforts of Africans, but others can help provide resources, stability and training. Others can also help break down barriers within Africa, including the language barrier between francophone and anglophone education systems. Nobody has done more than Marie-Françoise over the last forty years to achieve that.